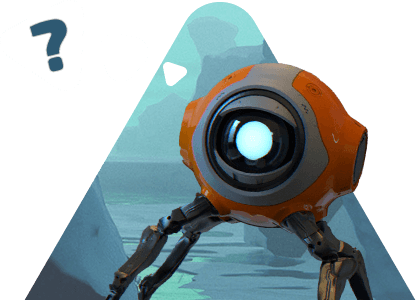 Check this list of most frequently asked questions about our game. Maybe you'll find an answer here! If not, please don't hesitate to contact us!

Well, at first we didn’t believe it either. But we did it! In MATCHO, you play as a character that can tag dangerous bugs with different colors. Tagging is a crucial part of the gameplay. By tagging three or more bugs of the same color you can create a match and destroy them.

You can also create enormous combos and chain reactions - like those you know from Candy Crush or Bejeweled games, but now it’s combined with frenetic action gameplay similar to DOOM.

Isn't "macho" a term for agressive masculine behavior of men?

From an online dictionary: To be macho is to display a tough, fierce, overly confident facade. A man who's macho would never cry or sip a cup of tea or pet a kitten, because none of these things would be seen as "manly" enough. In Spanish, macho means "male animal," from the Latin root masculus, also "male," but also "worthy of a man." However, this isn't what our game is called, and it is not about machismo.

Our game is called "MATCHO" - match + o. We have created this name based on the fact it's a match-3 FPS game about a young super-hero (thus using O in the end).

If anything, we are subverting the typical expectation for an FPS game. Instead of a violent shooter, MATCHO is our way to reinvent FPS by bringing in the colorful Match-3 elements. Even though that our main character is a man, he isn't trying to behave like a "macho". In fact, Max is a really kind character, who doesn't behave in a toxic masculine way even if he has super-human abilities that give him power.

Will MATCHO be as difficult as your previous game?

The main campaign of MATCHO is going to be easier than BLACKHOLE. This time, our goal isn't to create a hardcore game, but a balanced experience for a wide range of players. However, if you like challenges, we're working on optional quests and other surprises that will hopefully entertain even the most skilled players that are looking for a challenge!

I am colorblind, but your game is based on recognizing colors - do you have any accessibility options?

We are preparing a lot of options regarding accessibility (like resizing the subtitles). If you are colorblind, you will have a chance to set up individual colors for the bugs in the settings menu - so you will have a better overview of the battleground. We will also include some colorblind filters for the whole game.

At FiolaSoft Studio we understand how many people have color blindness, we even have a few people with various type of color-blindness in our team. So that's another reason for us adding an accessibility feature like that. The game also features an automatic aim system, which you can turn on/off at any time. You can also slow down the enemies or receive less damage during fights. It all depends on your gameplay style.

Nice "cartoon" graphics. Is this game for kids?

To answer briefly: no, this game is not just for kids.

We like stylized games. We realize that players that love photorealistic textures and gallons of blood might be disappointed. But we believe that our art style fits the entire game. It fits the story as well as the combination of Match-3 and FPS genre.

Is this game a non-violent shooter without blood?

Yes. Our game doesn't have any blood or gore in it. Even though there is a certain form of violence in the game, our game is not a typical FPS game that would display brutality (like tearing off limbs of other people).

The story of the game talks about how weapons are made. It isn't pacifist propaganda, it's more of cleverly using alternative options. In our story the common human weapons don't work on the alines. Max's ability is a "weapon" that doesn't work in a violent way. When Max uses his energy, he doesn't kill anyone. Despite that his powers still have consequences. We just portray them in a different way.

In our story, every action has a reaction. That includes "killing" the bugs. This is something you're going to discover while playing the game. We're looking forward to your reactions to our views on this.

P.S: Even though the game does not have blood and brutal violence, it contains serious topics including cynical humour and swear words. We wouldn't recommend this game to little kids, but they can still have fun watching the gameplay. The screenplay doesn't glorify the use of swear words or acting violently.

Do you have any voice acting in the game?

The game features a high quality voiceover, which has been recorded by a group of professional voice actors. The game will also have subtitles.

How much will the game cost?

We haven't decided on the exact price yet. But if you are really interested in an estimate, we are aiming to sell MATCHO for a normal "AAA indie" price. We will announce pricing as soon as possible, closer to the launch of the game.

Where can I buy the game?

We are planning to distribute the game on as many platforms as possible. For now we can confirm the Steam release for PC with Windows OS. We are also working on a release for Xbox Series X/S and PlayStation 5.

Currently we don't have any plans to port the game to Xbox One and PlayStation 4 - however we might be able to release the game on these platforms in the future. For now we're only developing for the current gen. Nintendo Switch release hasn't been confirmed yet.

Will the game support DualSense for PlayStation 5?

Yes. We want to use DualSense functions for our game. The exact implementation will be announced later.

Will the game support keyboard and mouse on consoles?

If the platform holders allow it, we will support it. In this case it depends on Microsoft and SONY - they could refuse our integration. We will try to meet all the requirements though, so we can support keyboard and mouse on consoles when the game launches.

Will there be any DEMO for the game available?

Simirarly to the release of BLACKHOLE, our previous game, we will offer a small story DEMO a few weeks after the release of the game. MATCHO will have a demo version, but it will not include any major story elements. DEMO will serve more as a benchmark for the players who don't want to buy something that doesn't work.

There is one planned exception. If you get a friend pass link, you can play MATCHO multiplayer for free as long as the player who has purchased the copy is playing with you.

Will the game have any sort of DRM?

No. MATCHO will be a DRM free game - except for the basic layer of protection which is included due to the nature of online services like Steam, Epic Games Services, Xbox Live, or PS Plus.

However, this doesn't mean we are approving of pirated copies of our game. Neither do we approve of software piracy. We strongly believe that people will appreciate our hard work and if they find our game fun, they will buy their own original copy.

Is the game connected somehow to the BLACKHOLE?

Yes, but actually no.

MATCHO is a standalone story, which takes place in a shared universe with BLACKHOLE. It was a decision we made after we spent a lot of time building complex backstories for the characters of BLACKHOLE. We realized that MATCHO's main plot greatly sits inside our already created universe, which makes it easier for writing great character stories.

Story of MATCHO is happening approximately 40 years before events of BLACKHOLE, so not many connections have been made - still, fans will be surprised as we reintroduced a few characters such as Jetsen or professor Tirsh.

We strongly believe that you will enjoy MATCHO even without knowing our previous title, but if you want to explore more, you can give it a try here.

If you are a media outlet or a content creator, please contact us through our contact form or e-mail. We will do our best to get back to you as soon as possible. Please include all relevant channel/outlet information to make it easier and faster for us to answer.

Looking for interviews/info not related specifically to the game? You can send us a message via contact form as well, but we cannot guarantee any answers.

*Hardware Requirements are subject to change.